Early the year, February 1st to be exact, Carl J. Hohenstein was granted a patent for his device (356,877 Sound recording apparatus). The patent speaks of the accuracy the machine could obtain through its optical recording method. A focused beam of light would record an oscillating line on a photosensitive piece of paper. After the photosensitive paper was developed it could be reproduced by engraving or photoengraving a metal sheet which could then be read by a stylus in the usual fashion.

Another optical recording device, created by Leo Bock Jr, received a patent on June 7th (364,472 Recording and reproducing sound waves). This device seems to have functioned through a similar method of focused light recorded on a medium. The medium this time was an electrical conductive film.

November 8th saw the patent granted to Emile Berliner for his Gramophone (372,786 Gramophone). Like the vast majority of devices this one recorded the sound to a cylinder. Unlike previous versions, Berliner’s cut the recording medium horizontally in stead of vertically, thereby producing a grove similar to what we see on records today. The sound was reproduced by a stylus reading the grove.

On November 29th Charles Sumner Tainter received a patent for an improved recording cylinder (374,133 Paper cylinder for graphophonic records). Instead of flat sheets of paper just rolled into a hollow tube a coated in wax it would now consist of several layers of helically wound strips of paper cemented together and coated in wax. This would form lighter and stronger recording cylinders.

Charles Sumner Tainter was granted another patent on December 27th (375,579 Apparatus for recording and reproducing speech and other sounds). This was another improvement patent for the already existing graphophone. In all there were 32 improvements made to the previous design, most having to do with tubing for sound transmission to and from the stylus, general strengthening of the device and some of the mechanics that made the recording/reproduction mechanism turn. It was a vast improvement of the entire machine. 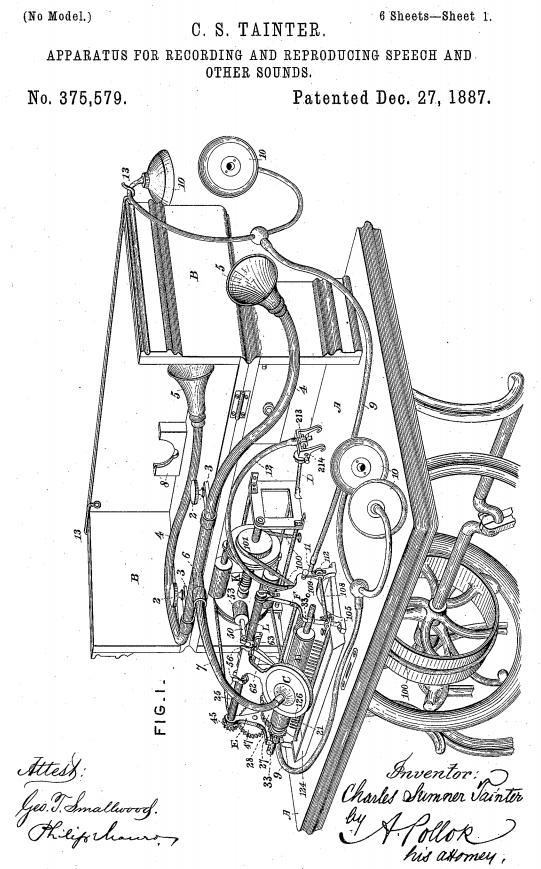 In 1888, the introduction of a new for of recording medium would change the course of recording history forever, although not immediately. The next year would see at least 28 patents granted in the area of sounds recording and reproduction. I may have to break it up into a couple parts, or condense some of the repetitive patents.

This site uses Akismet to reduce spam. Learn how your comment data is processed.